As you can probably tell by my posts, I love parties. There is nothing better than spending time with loved ones. Add in some delicious food & beautiful decorations and you have a perfect day! A very close family friend hosted an absolute gorgeous garden Valentine’s tea party this past weekend for the littles in our circle. Nothing like seeing our sweet kiddos all dressed up & sipping their pink lemonade out of fancy tea cups. Of course I think some of the beautiful, sophisticated decor was lost on them since all of the kiddos ended up playing in the ditch (so funny how things like that always make them happiest), but as parents we can appreciate the pretty event & enjoy sharing “grown-up” things with them. Anyways, on to the pictures… 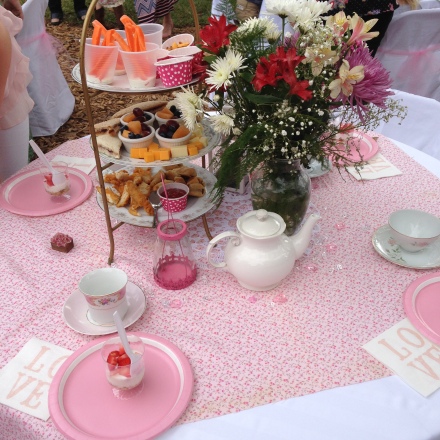 Each table was beautifully decorated and had its own tea pot & selection of kid-approved lunch snacks. 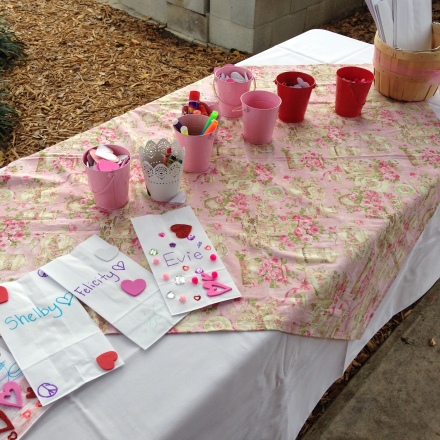 There was a table set up for the kids to decorate their own bags for the Valentines exchange. *Side note: We had this party right after Valentine’s Day so everything was at least half off! Score!

Arts & crafts are a good idea for every party! 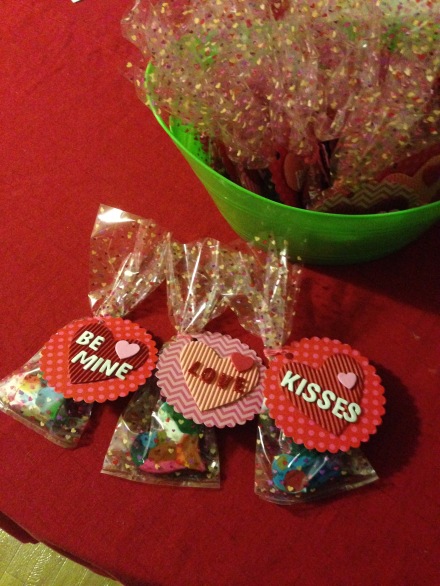 Destiny made heart crayons for her valentines. Click here for a link to that idea.

Photo booths are the perfect way to get a great shot to remember the event.  A nice back drop & a few simple props are all you need. Kids are more likely to do a photo shoot when they get to play dress-up! Who wouldn’t be? 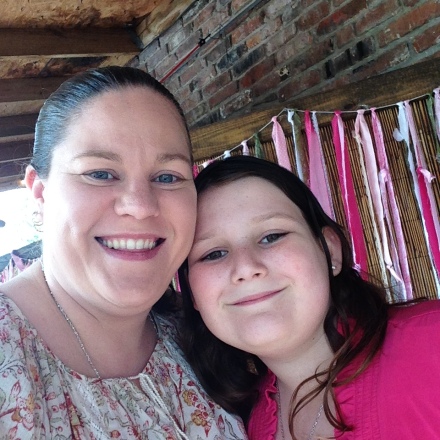 Dessert table… cause isn’t this the best part of any party? lol

Notice those little chocolate pinwheels… cut up a few Little Debbie’s for a quick & easy dessert! 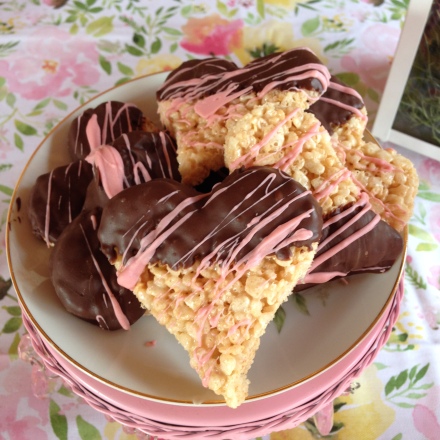 Rice crispy treats are always an easy crowd-pleaser & they can easily be transformed to fit any theme. A heart shaped cookie cutter, melted chocolate, & pink frosting gave these a sophisticated look.

Marshmallow pops are super easy to make. Grab some paper straws from your local Target & sprinkles to match your theme, and you have an easy yet beautiful dessert to brighten any table. I talked about these before here. 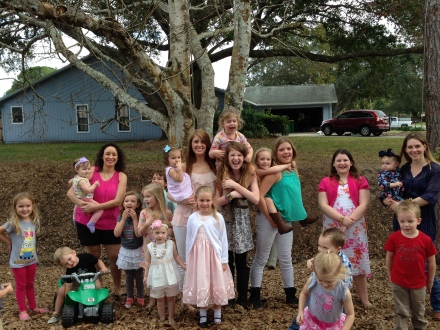 Getting a group shot is always a challenge, but as you can tell these kiddos had a blast!

Hoped you enjoyed this party idea as much as I did, and I hope you & your loved ones had a wonderful Valentine’s Day!! ❤

I love a good themed party, and my friend, Emily, hit it out of the park with an Army birthday party today for her son! Her detailed decorations & Army themed activities were too good not to share! Check it out…

to Caleb, our favorite 7 year old! 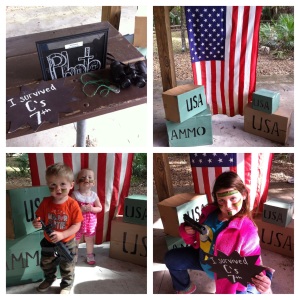 After getting supplied with dog tags & military helmets and issued their toy weapons, these Army recruits got camo-ed up with a little face paint & posed for their enlistment photos at the Army photo booth. Some paint & stencils turned plain cardboard boxes into  military crates & a American flag made the perfect backdrop. (Photo booths are such a fun way to document just about any occasion! Jotting down an email address for each guest before they pose would allow you to send them their picture at a later date so they can have a lasting memory of the event. No matter what the age group, everyone needs the chance to let loose every once in a while & play a little dress-up!)

No Army party is complete without a timed playground obstacle course & military pinata to keep those soldiers supplied with sugary treats!

Even the inside of the cake was camo, almost too cute to eat, almost… I may or may not have just documented myself cheating on my diet

Sigh… via Pinterest I found a good camo cake tutorial & a camo cupcake tutorial with an easy way to camo up the icing as well. Click the bright green for links to those blog posts if you’d be interested in making one of these for a man, big or small, in your life!

I can’t forget the youngest recruit & little sister of the birthday boy, the adorable Miss Calayla, who was much more worried about her slice of pizza then posing for her photo shoot. LOL 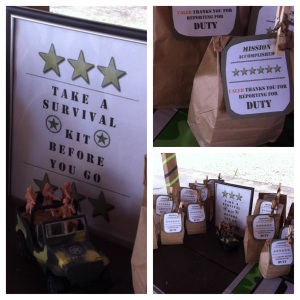 The recruits were sent home with fun survival kits thanking them for reporting for duty to help celebrate this special boy’s birthday!

Fun-filled, memorable Army birthday party… Mission Accomplished!! Hoped you enjoyed this party theme idea as much as I did! 🙂